A recommended walk in Rocha, Uruguay, is to visit the Cabo Santa María Lighthouse in La Paloma, built as a result of the great number of shipwrecks that occurred in the area. Climbing the spiral staircase of 143 steps, you reach the summit, where you can take charming panoramic photographs and appreciate the geography of the seaside resort from above

The Cabo Santa María Lighthouse can be visited every day throughout the year from 10 am to 12:40 pm and from 3:00 pm to 5:30 pm. The cost of the ticket is 25 Uruguayan pesos per person. The entry of children under 8 is prohibited. The maximum stay on the balcony is 20 minutes.

The construction of the lighthouse began in 1870 but, as there were no stone or iron materials in the area that served for this shape, it was necessary to move them by ship from Montevideo. In April 1872, when the tower had reached 30 m high and its inauguration was scheduled, it collapsed on itself, taking the lives of employees who worked there. The lighthouse was inaugurated finally, on September 1, 1874, being this the official date of the creation of the spa.

The first lighthouse keeper was Don Ciro Pini, an Italian immigrant, who contributed in part of the construction project of the lighthouse, with drawings of structures and cuts in the tower. At the end of the work, he asked to stay, and settled with his family, thus becoming the first settlers of the place. 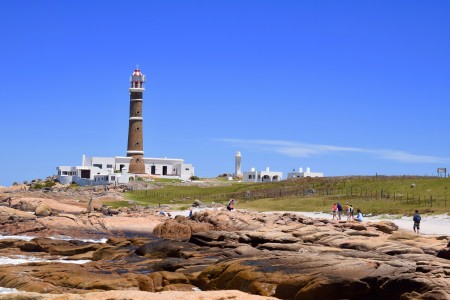